Why was Boris wheeled out to lead the Brexit campaign

Could it be that The Government are scared stiff of Nigel Farage with a base of already 4 million from the last election, Immigration is the BIGGEST concern for many British people. Now Boris Johnson has been wheeled out by The Government to try and head off Nigel Farages influence because he has been on the campaign trail for months with the Say No campaign. This picture from a meeting in London in November. 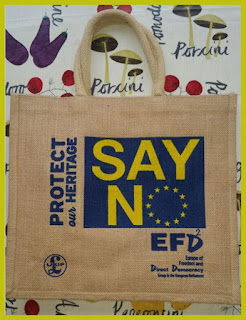 Posted by John E Rolfe at 11:10 No comments: Links to this post

Obama butt out. Why did the President of The United States of America urge us to vote IN ! and quote that tens of thousands of Americans who rest in graveyards across Europe, who spilt their blood to free us from German aggression, now would want us to be ruled by those same Germans.
If we vote to stay IN their will be an earthquake of ground breaking proportions as those tens of thousands of American dead and hundreds of thousands of British troops roll over in their graves. Germany will have been seen to win WW111 without a shot being fired !

Posted by John E Rolfe at 10:23 No comments: Links to this post