There are two memorable anniversaries this the first Magna Carta is 800 years old this year. This made all people equal before the law, we need to get rid of The European Human Rights and return more to the rights outlined in The Magna Carta. How would this affect us ? At the moment we have all sorts of people flooding into Britain, Murderers, Rapists Thiefs, Beggars and when they re offend here and are jailed they should be deported at the end of their sentence, but what happens is they quote their human rights and are allowed to stay here. What about our Human Rights  ?
As to all people being equal before the law, how comes MP's of all colours even Royalty who have been commiting Child Abuse, are given protection from, The Special Branch, Secret Services, and The Police ?

The second anniversary today its National Holocaust Day it's 70 years since Auschwitz was liberated, so in my lifetime The Germans were committing the most atrocious atrocities. So are you really happy about being ruled by them now ? We need to get out of Europe NOW !!!!!

There is only one party that will promise A Vote on Europe unconditionally, not only this but we will give you a vote on all important issues. The Roar Pary (stands for referendum and reform ), we will give you real democracy with Reality politics.

www.theroarparty.com
Posted by John E Rolfe at 09:55 No comments: Links to this post

The Dam has broken over Child Abuse.

The Dam has Broken over Child Abuse and will the tsunami its released  sweep away The Government, and not just The Conservatives but all the political parties that have been instrumental in this cover up.  Leon Brittans death has triggered multiple allegations of his sexually  abusing boys.
Why has this cover up been going on for so long. Why did The Special Branch heavy mob threaten Mr Hale, The Bury Messenger editor with prison if he didn't hand over The Paedophile Dossier given to him by Barbara Castle. Why was The ex Minister of Health for Jersey imprisoned twice in Jersey when he was investigating child abuse in Jersey and threatening to expose it. Why did Chris Fay have a gun held to his head by Special Branch and told to back away from allegations surrounding The Elm Guest House in Barnes.  Why did The Special Branch Boat Patrol nickname Edward Heaths Boat "Morning Cloud" , "Morning Sickness ", was it because Michael Shrimptons allegations that Jimmy Saville was taking children onto The Boat, to be abused and mudered were true.

This has now gone beyond Child Abuse and now there is evidence of Torture and Murder. 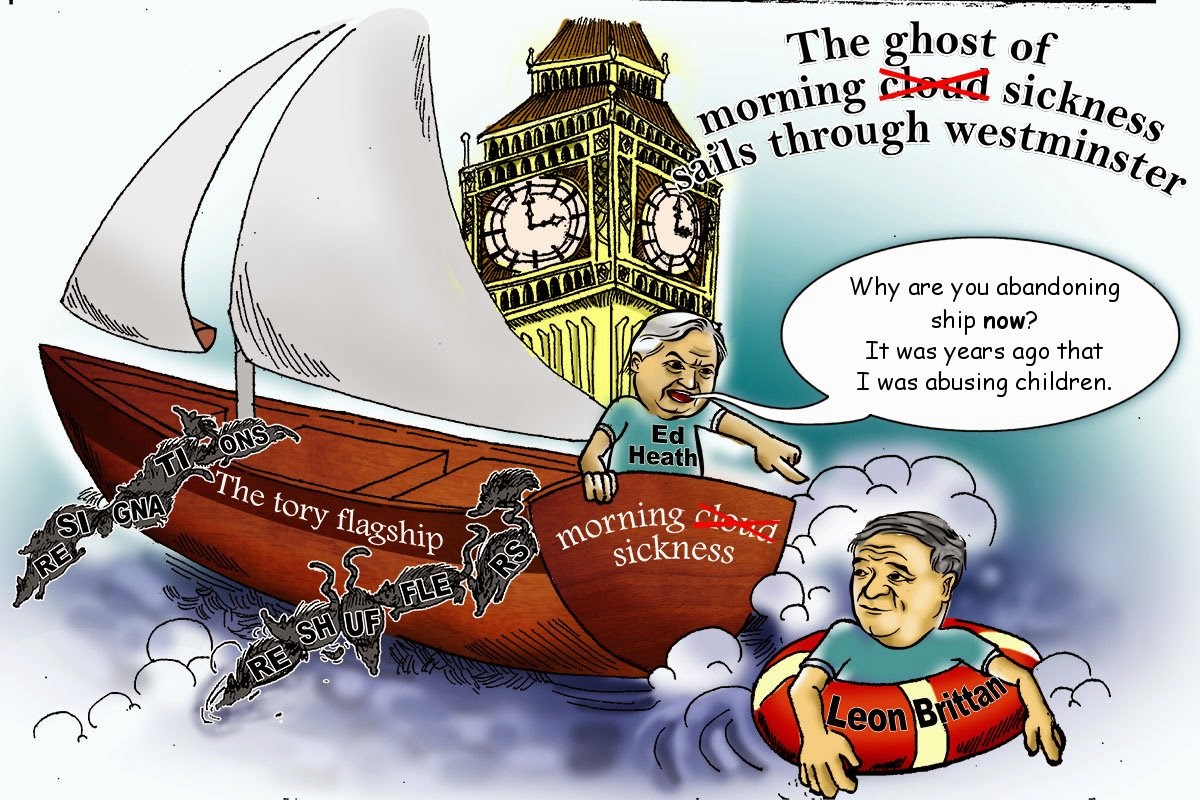 Mr Cameron and Mrs May there are questions to be answered, and how much longer can  you not comment on any of this.

Posted by John E Rolfe at 17:49 No comments: Links to this post

The housing in London should be for English Residents, surely we haven't spent 60 years rebuilding our Capital after it was ravaged by The Germans to give it away to foreign nationals, we should be like Switzerland who only grant 1400 residency permits a year or Thailand or Philippines where only their residents can buy property. I don't get it where the government are encouraging foreign nationals  to buy our housing stock at inflated prices, pushing our own residents out of London. London should be for Londoners, The Roar Party will stop this ( after a reality political vote ) and only allow our nationals to buy English Property. We will give the foreign  nationals 2 years to liquify their assets, we want to take back London, and also property all over England.
We will go further than this with Companies,  there are to many companies operating in England who through dodgy tax dealings are not paying their full amount of tax, so companies will only allow to operate in England with a 65% ownership by British Nationals.
We will allow the electorate to vote on these proposals with Reality Politics, democarcy for The People. E-votoing on all important issues. www.theroarparty.com
Posted by John E Rolfe at 12:04 No comments: Links to this post

The Most Important Meeting in Parliament this century !!!

I was privilaged to attend a meeting yesterday titled "CSA Inquiry Time 4 Justice & Action Meeting".  I think 250 to 300 people crammed into the largest Committee room in The House of Commons to hear a variety of people talk about Child Abuse and Sexual Abuse, Murder and Torture of Children mainly Children in care, although there have been reports recently of Children being abducted and treated likewise. The shear scale of this abuse is overwhelming. A variety of victims stood and addressed the meeting, it is very emotional to hear these people talk openly about their abuse, not an easy thing to do in front of such a large meeting. One man who had bottled his abuse up for 35 years before having the courage to even admit it happened. Another an ex-minister of Jersey's Parliament who had stood by his convictions, and tried to bring this into the open, needless to say he has lost his job and suffered two spells in jail for Contempt. I was there because I have been following some posts from Bill Maloney and his Piemash Films, he made his feelings felt at the meeting and is it any surprise because I feel the pain that is in him.   Bill remember everyone that was there is on  your side.
I was surprised that none of the leaders of the parties showed their face in the meeting or even Theresa May but when I thought about it, and this is the reason for my title "The Most Important Meeting in Parliament this century !!!" because when this breaks out and it's happening all over the web.
Just look at the following, :- Google :- Edward Heath, Jimmy S aville, Haut de Garenne ( The childrens home on Jersey ) or Google:- Leon Brittan, Elm Guest House.
When people find out that allegedly Prime Ministers themselves, Home Secretaries, Members of The Monday Club, MP's of all parties, A former Spy, Diplomats, A Sinn Fein politician, Top entertainers, Former Deputy Chairman of The Conservative Party, have been guilty of these abuses, torture and murder.
So why my title because when this breaks out to the general public, and it won't be long because it is like a tsunami on the web, I can't see it doing any less than bringing down the goverment.
And Nigel Farage if you want to be  "The Next Prime Minister" copy our main political idea (Reality Politics) and promise people e-voting on important issues. We have had enough of people promising much before they are elected then back tracking when they get in power. Tony Blair, Gordon Brown, David Cameron all lied to us about a vote on Europe. So lets have e-voting on this and all important issues, lets change Parliament into a debating chamber and let the people decide on all important issues, lets have real democracy. We are ready for a revolution, we have been lied to for to long.

As well as The Polish coming over and taking our jobs, they are now sending cheap Milk that could put our Dairy Farmers out of business. The sooner we are out of Europe the better, The Government decimated our British Pig Farmers, now they are going to do the same to The British Dairy Farmers.
The Roar Party will give you a vote on Europe, as well as other important issues, they are the only party that will give you real democracy. www.theroarparty.com
Posted by John E Rolfe at 23:09 No comments: Links to this post

While you murder my brother !

Posted by John E Rolfe at 14:06 No comments: Links to this post

Brentwood got caned over Christmas, I have never heard so many reports of burgleries in such a short time. The Government tell us crime is going down, Oh Yea ! yet more lies. What is the Governments answer to this, cut back on Police, close more Police stations, with an infrastructure built for 60 million people and now bulging at the seams with 80 million people here. They are failing in their number one priority protecting their people. I think this was shown up dramatically in the Lee Rigby enquiry recently when The Secret Services phone Romford Police to have Adebolajo picked up, and they ask why, pick him up on drug charges, Romford Police answered that they would put him on the end of the list of drug dealers that thay had to deal with. We all know what happened next !!!
Crime is out of control, there are immigrants coming into the country with the most horrendous criminal records ranging from Murder downwards,  we demand the Government do their number one priority and start to protect their citizens. #cameronmustgo
Posted by John E Rolfe at 11:44 No comments: Links to this post

Vince Cable was on the news this morning saying there are people still not conected. The Roar Party will connect all homes in Britain with "High Speed Internet" we need to get into the 21st Century, we are way behind some other countries with Internet speed. The Roar Party will utilise this to have e-voting on all important issues. We will get back to the principles of real Democracy with "Reality Politics" for the people. We have had enough of lying Politicians saying one thing before they get elected then just ignoring us when they get in power, like the liars, Tony Blair, Gordon Brown, David Cameron. We will give you a vote on Europpe and then give you a vote on sending the European Immigrants home. #cameronmustgo
Posted by John E Rolfe at 11:31 No comments: Links to this post

This time from an immigrant Doctor and The Church of England. We need to up the percentage of English Doctors practising  in England, the problem is that when people come here they are coming from cultures and practises that are so different from ours. If you can read this girls story without shedding a tear I would be very surprised. Yet another children's home where we need to track and trace every child that attended here, and listen to them !. The Government have been ignoring this for to long. Hardly surprising when there are accusations against Prime Ministers, Home Secretaries, MP's,  The Police, MI5, Secret Services of one sort or another.

Read Teresa Coopers story and you will join  in the clamour for these children to be heard.

Posted by John E Rolfe at 10:07 No comments: Links to this post