The Roar Party call for Bill Maloney to head Child Abuse Inquiry. It was always going to be a whitewash with established figures heading this inquiry, because if the Truth came out about, Edward Heath, Leon Brittan, Harvey Procter and other establishment figures, it would bring down The Conservative Government. Remember not long ago there was a report on a Friday that 7 Police Forces were investigating Edward Heath ? then on the following Monday there was the little boy drowned on the beach, the whole media swung away from The Edward Heath story onto Immigration.
Now we have Teresa May as Prime Minister who must have been complicit in helping to carry on this whitewash when she was Home Secretary, must have known all about this story. 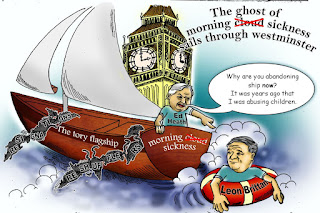 Posted by John E Rolfe at 14:33 No comments: Links to this post